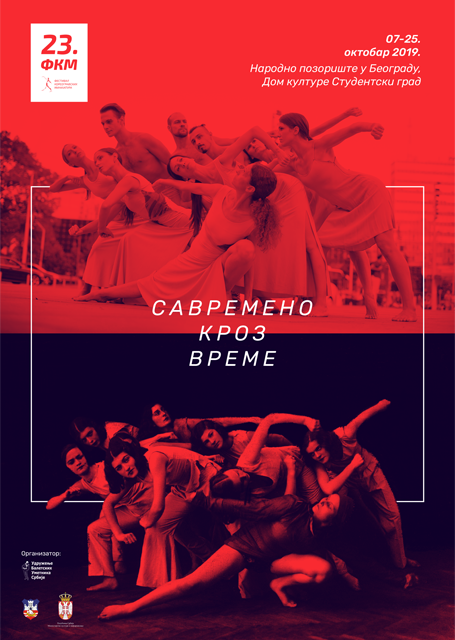 23 FESTIVAL OF CHOREGORAPHIC MINIATURES IN OCTOBER

23 Festival of Choreographic Miniatures (FKM), with the slogan CONTEMPORARY THROUGH TIME, will be held from 7-25 October in the National Theatre in Belgrade and Students’ City Cultural Centre. The slogan aims to draw the parallel between the founder of contemporary dance in our country, Maga Magazinovic and current artistic dance. At the same time, it raises the questions –what did contemporary stand for in the past and what is it today; as well as the question –what do we see as innovations in art at the current moment? At the same time, this is also an invitation for all of us to look after and nurture our history and its representatives.

The Festival’s Main Programme – international competition of choreographers, will be held on 15 and 16 October, on Rasa Plaovic stage at the National Theatre in Belgrade, where domestic and foreign choreographers of short choreographies will compete for Festival’s awards.

The mission of the Festival of Choreographic Miniatures is to promote choreographic art in the field of contemporary artistic dance. This is why creators of all styles of dance were invited as participants, while the jury members will select nominees who will, along with three monetary awards, compete for the plaque Aleksandar Izrailovski, presented for innovation, and also for the critics’ choice award, as well as viewers’ choice award.

Serbian Association of ballet Artists (UBUS) as the organizer of the festival and the advocate of better status of artistic dance in our country, pays special attention to domestic creators through support for their further work and promotion. Thus, UBUS will present a unique award Encouragement to a Serbian choreographer. The recipient will also receive funds to create and present a play that will be premiered as part of non-competition programme of the next FKM Festival, followed by presentations on other festivals and stages in different towns in Serbia. This places the focus on yet another aim of the festival-decentralization of culture through our project FKM on Serbian stages.

The audiences will this year have a chance to see, in non-competition programme, on stage Rasa Plaovic of the National Theatre in Belgrade, on 7 October, the ballet called One, by choreographer Sanja Ninkovic, last year’s recipient of Encouragement award. This play will officially open the Festival.

Furthermore, as part of non-competition programme, a dance play Space for Revolution will be performed, created by the recipient of Dimitrije Parlic award for choreography in 2018-Isidora Stanisic. The play will, aiming to educate the audience and popularise artistic dance, be performed on the stage of Students’ City Cultural Centre, on 25 October.

For the past six years, FKM also includes accompanying programme – seminar of Critical Practice in Artistic Dance, with an aim of reviving dance and ballet critical practice through lectures, talks and workshops with professionals in this field. We would also like to announce the promotion of UBUS publishing project Maga Magazinovic – philosophy of dance and/or more than dance, a project which allowed us, in cooperation with the author- Vera Obradovic, PhD, to collect all scientific articles written by professionals researching the work and achievements of Maga Magazinovic and to prepare a valuable reference for future generations.

Festival of Choreographic Miniatures is organised with support of Ministry of Culture and Information of the Republic of Serbia and the City of Belgrade Secretariat of Culture.